How to draw a girl from behind

Here's my reference (taken from fotosearch.com): 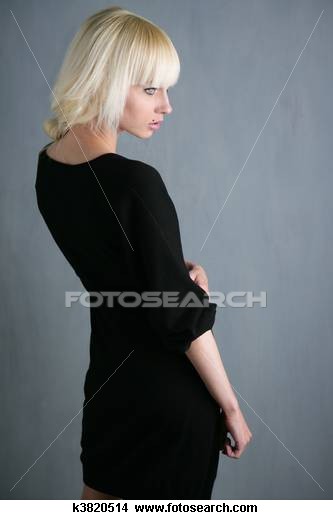 1. Draw your basic sketch. (On a new layer, not on the background layer. You're going to need transparent lines later).
2. Fix line weight.
3. Fix details in hair. (Remember that there isn't really a right or wrong with hair. Hair does it's own thing, so do whatever you like and what feels right. Just remember hair works together in strands.) If the volume and shape feels wrong, fix it. Make it nice and volumous if that's the look you're trying to go for.
4. Start with shading. I used pencil sketchiness here (using the brush tool in PS). This method can be used to give a sense of texture on the fabric. Note: Decide on a light source direction before you start shading, otherwise you'll confuse yourself.
5. Fill in the hair colour. I had black in mind from the beginning, but I put the initial detail in the hair, because I wasn't sure yet if I was going to make the hair solid black. In the end I decided solid black worked better. And the initial detail helped me place the highlights (next step).
6. Add highlights to hair if you chose a dark colour for your hair. Otherwise, if you chose a light colour for the hair, add shading the way you did with the dress.
7. Add a shiney effect to the hair. (I made a new layer, drew a white curved line, blurred it and lowered the opacity accordingly.)
8. Using random loose strokes, add in some strands of hair.
9. Shading: Photoshop is a wonderful thing, make a layer below all the ones above and paint in some shading. I used medium gray. Keep in mind where the light is coming from. Experiment. Have confidence. Shading is what makes the image POP out!
10. Ribbon: I decided the dress was too plain in the back. And since the character's name means "flower", I thought a flowery ribbon would work well. I drew this separately on some white space, then positioned it over her dress and modified it according to the angle we view the character from.
11. Ribbon shadow: Remember to not only give the bow it's own shading, but to also give it a shadow on the dress.
12. Paint in a background.
13. Add some texture.
14. Fix whatever looks weird. If it looks weird to you, it will look weird to other people.
15. Add final details, like highlights on the nose and lips, make the eye colour more dramatic, etc.