With the advancements in the Android smart phone technology, we’re day by day stepping into a world where phones don’t have any physical buttons at all, well, except the power button and the volume controller. The future is imagined with phones that only have screens.

However, for the people who tend to enjoy the physical existence of sweet little real keyboards, there are still plenty of choices out there in today’s Android smart phone market. Super texters and heavy weight typers who’re using Android smart phones are thankful to these mobile devices that feature a physical QWERTY keyboard. 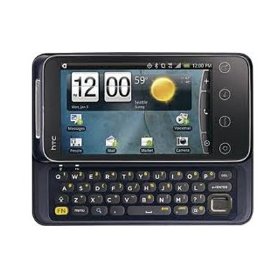 HTC, who is a giant competitor in Android smart phone industry, has a line up of devices with physical keyboards. However, HTC Evo Shift 4G has collected so many positive reviews for it throughout various online forums, user review sites and expert review sites. Launched in January 2011, it’s not really a new phone, and its nice keyboard is a direct fact for its success in the market.

The phone is 11.7cm long and 6cm wide, allowing it to have a fairly decent sized keyboard. Keys of the keyboard are large enough to welcome thumbs of users and there is plenty of space between each key, so there is not a risk of any typing mistake. Even if you did make a mistake while you’re typing, Android has a great auto correct and word guess feature that corrects incorrect words based on the context it is used.

Someone can say its 65K color screen is somewhat low end, but it’s so great compared to its price. HTC Evo Shift 4G runs Android 2.2 Froyo on a 800MHz processor and that is more than enough if you don’t plan to play games or if you don’t have a serious habit of watching videos on your smart phone. It has 512MB RAM and 2GB ROM. It supports SD Cards up to 32GB. 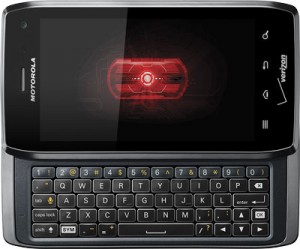 Motorola has always been a great manufacturer of Android smart phones. Since the original droid that was released in November 2009, their products have seen some serious development. Motorola DROID 4 is quite new player in the field and it was only released on January 2012. It supports all 2G, 3G and 4G LTE networks.

Motorola DROID 4 features a compact keyboard that looks very familiar to their desktop cousins. Although one might think it’s hard to type on this keyboard, it certainly isn’t. Motorola has done a great job with their flat keys and they have made sure that no one will press wrong keys unwontedly.

Running Android 2.3 Gingerbread on a 1.2GHz processor aided by 1GB RAM, you’re almost carrying a full featured computer in your pocket. ROM storage is 16GB and if that’s not enough, you can add upto 32GB through a SD Card. 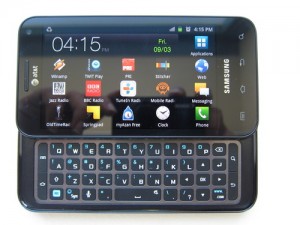 This smart phone from Samsung, probably the biggest Android smart phone manufacturer, has quite a few names. They call it “Galaxy S Glide”, “i927 Galaxy S II” and “Gidim”. However they call it, that phone combines Samsung’s greatness with a sliding out keyboard. How awesome is that?

Its keys are almost sunk into the keyboard surface and one might think it’s hard to type without looking at it, but you’ll realize that is a wrong thought as soon as you start typing with it. Its keys’ slight bevel is enough to tell our fingers that they exist there and they become friends with user’s fingers rather speedily.

It was released in October 2011 and it supports 2G and 3G networks. Samsung Captivate Glide runs Android 2.3 Gingerbread and it has a 1GHz dual-core processor. It has 1GB space for each RAM and ROM, and supports up to 32GB SD Card. 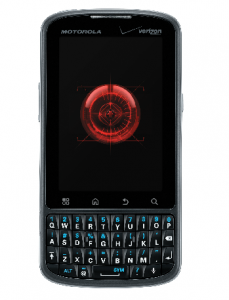 Don’t you like the slide out type of keyboards and do you want a keyboard that is always with you? Well, Motorola DROID Pro is yours to take. It can be easily used with two thumbs though it’s quite small. Unique key design make sure you press the correct key you wanted to press.

Motorola DROID Pro was announced in October 2011. You can use this smart phone with both 2G and 3G networks. Motorola has installed Android 2.2 Froyo with this phone. Although it is quite old now, you can’t really complain because it has got 1GHz processor aided by 512MB or RAM. Motorola DROID Pro is also equipped with a ROM of 2GB. You can use SD Card in sizes up to 32GB with this smart phone as well. 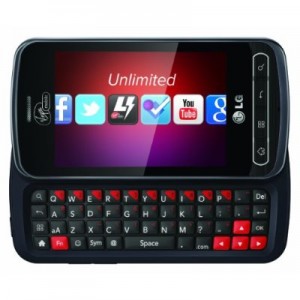 LG is an unbeatable player in the sport of Android smart phone manufacturing and it has brought a device with a physical keyboard for those of us who want to feel keys in their keyboards. LG is well known for its stylish looking phones and LG Optimus Slider carries that quality as well.

It’s keys are easily felt by fingers and guaranteed for a comfort typing experience. The design of the keyboard is a candy for the eye too.

Released in October 2011 to support 2G and 3G networks, it runs Android 2.3 Gingerbread as its operating system. The processor speed is 800MHz and it can easily carry out any daily task we ask it to do. The processor is supported by 512MB of RAM, which is more than enough or personal use if you don’t expect high quality entertainment from it. To install apps it has 512MB ROM as well. If you feel that’s not enough, you’ll be pleased to hear that it supports SD Cards up to 32GB.

Although above are the top players in the Android smart phone market that accompanies a keyboard with them, there are many more choices. When it comes to Android, choices are unlimited. Many of the above described phones shares common features such as high mega pixel cameras, front cameras, wifi connectivity, wifi hotspot and more. All the Android smart phones these days are expected to have them. So, best of luck with your Android phone!

About The Author:
I'm a student in Canada. I like learning new things on my own, but don't like to be told how to learn. I also like writing. Interests: fitness, martial arts, writing, photography, games, psychology, alternative education... and more.
(Read more posts by Logan)