How to draw a car

The tips I'll be giving here can be used to draw ANYTHING. The same basic principles apply to every drawing. Anyone can draw. Yes, you heard me, anyone - even you. If you can draw a circle, triangle or square, then you can draw, as you'll see later.

The trick you have to learn is how to apply these basic shapes (or combinations of these) to the specific objects you want to draw. This tutorial has been compiled to help you to draw a BASIC car. I'll make advanced tutorials later that will cover shading and coloring.

Before you start, here are some tips to keep in mind:

1. Get inspiration
Before you start drawing, look at other artist's work, especially those you admire. More often than not, their techniques and styles will stick in your mind and come out when you put your pencil to paper (or tablet to screen).
2. Use a reference
A reference is a picture that will serve as an example of what you want to draw, something you can refer to at any point during your drawing process. Do not underestimate the power of references! Even great artists use references – think Mona Lisa.
3. Keep in mind your basic shapes
Hold your reference picture far away from you, or if it is on the computer, walk a few steps away from the screen – no, not out the door! Just a few steps back... that's it. For the techno-savvy – use zoom to make your picture smaller. Try to identify basic shapes, the largest first. (More about this later).
4. Be confident
Anyone can draw. It just takes practice. Be confident! The force is strong with this one. (Yes, I mean you.)
“In order to succeed, your desire for success should be greater than your fear of failure.” (Bill Cosby)
5. Be patient
Most people give up when their first attempts fail. Rome wasn't built in a day... It sure as heck was destroyed in one, but never mind that. Be patient and try again. Sometimes your third or fourth attempt will turn out to be your masterpiece!
“Defeat is not the worst of failures. Not to have tried is the true failure.” (George Edward Woodberry)
“If at first you don't succeed, try, try again. Then quit. There's no point in being a damn fool about it.” (W. C. Fields) – just had to put that one in!
6. This is the wrong way to draw a line: hold down your pencil and drag. (As you can see, you will have little or no control over where the line goes.)

7. This is the right way to draw a line: make light, short, feathery strokes. Remember: don't press too hard, since you are going to erase many of the lines later. (This way you have more control.)

I drew my car in Photoshop CS2 with a tablet, but the same principles apply to traditional drawing (using pencil, paper and eraser.) It's actually easier to draw on paper, since you are able to rotate your page to get the damn lines straight and to get those arcs beautifully... arc-like.

This is the reference picture I chose. In retrospect I realize I should have chosen something easier.
Tip: A straight-on side view of a car is easier to draw than something like this, with it's depth perspective. PS: I chose a Porsche cos they rawk! Rawr. (If this picture is copyrighted please let me know and I'll credit the owner – no royalties though, I'm broke). 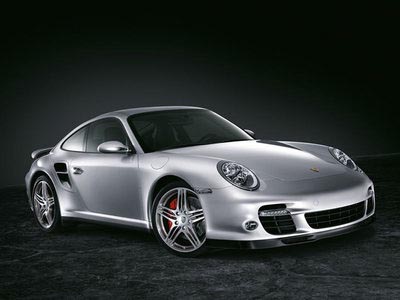 Here I marked the basic shapes. Study your picture. You might see different shapes in different places (depending on how much bad pizza you had.)

Now draw the basic shapes of your car on paper. Feel free to use a ruler for straight lines (and horizontal lines and vertical lines). Don't press too hard if you are using a pencil. We're going to be erasing these lines later, so they don't have to be perfect. Pay attention to: Line length and the relative position of shapes to each other. Feel free to add guide lines (mine are indicated in red). 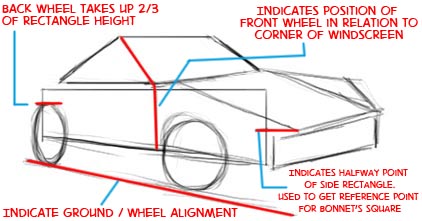 Refer back to your reference picture and add extra shapes to the body of your car. (This is where your car is going to take shape.) In this Porsche's case, I'll add the rounded back of the roof, the shapes at the back of the car, I'll round the front rectangle, add the lights, windows, etc. All the while keep in mind the relation of your new objects and shapes to the other shapes you already have on paper. If necessary, use a ruler (or your finger or pencil) to measure existing lines on your paper and estimate the length of your next line. Occasionally take a step back from your artwork and pay attention to proportions and shapes. 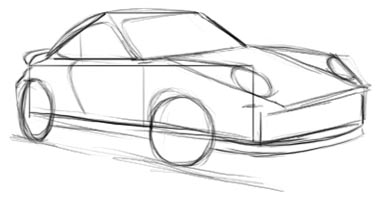 Start erasing your guide lines and basic shapes as you add more detail.
(The car looks a little different here, since this is a different drawing.)

If you got this far, congrats! You have your car. If you want to spice it up more, add color and/or shading (I'll make tutorials for those), OR try again. Remember: practice makes perfect! Most, if not all, the greatest artists out there had to practice for most of their lives to get to the level where they are at now. Being good at something requires hard work and motivation – something no one likes to hear, but it's true anyway. Practice, practice, practice.